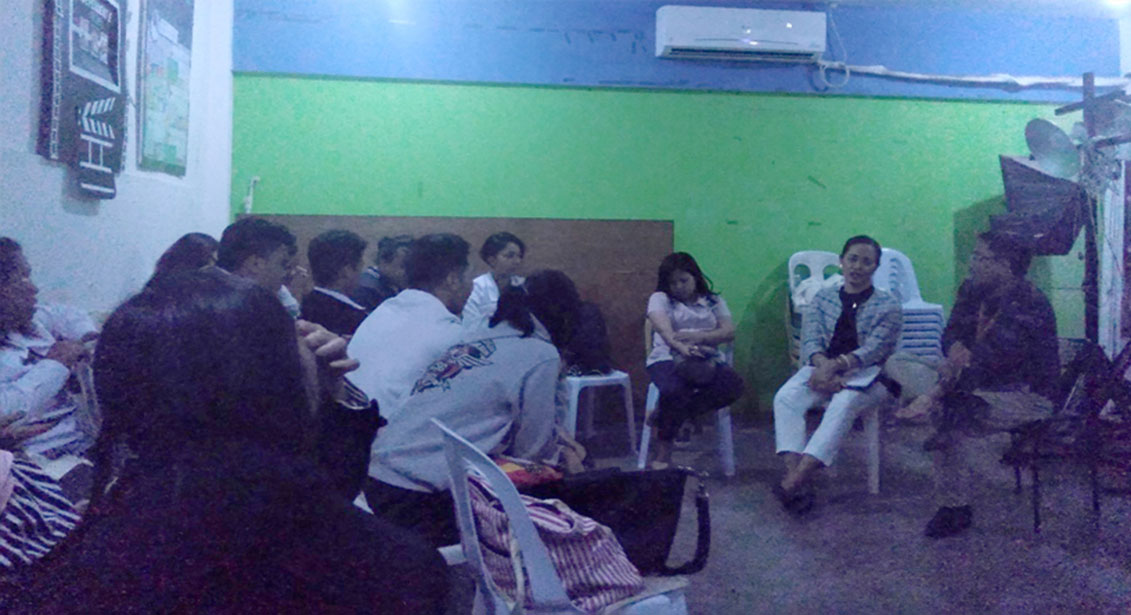 PLANNING IT RIGHT
Narrative Report
By: Kyle Vincent A. Dizon

The Committee Board of the AB Communication students conducted their meeting on the upcoming events that will be held this 28th to 29th day of February 2020 in the Production Room in the College of Arts and Sciences, Cagayan State University – Carig Campus last February 19, 2020. It was led by the Program Coordinator Sir Jan Justin Rodriguez, Mrs. Yrmeliza Rodriguez and Ms. Patrianne Padua together with selected few Committee officers. The theme for the festival was Rediscovering the Cagayano culture through film.

The session was about the agenda for the upcoming AB Communication day and the 3rd Sine Agila Film Festival in the near-end February. The first agenda of the meeting was all about the AB Communication day whereby it will showcase talents of these young media practitioners. The venue was on two separate locations; College of Arts and Sciences Conference Hall and at the AB Communication park. The AB Communication society marked it as an exciting event as all will converged into one as. The target budget was 21,000 pesos for the both events total expenses. They would come from the organization savings, sponsorships from the alumni and also from the income that would be generated by every video entry of every AB Communication participants participating on the event. The IMC was expected to contribute for the event as well as the AB Mass Communication Alumni. There will be an opening float whereby all the participants were expected to walk with their own style towards school. The allotted budget was 1,000 pesos. There will be tokens for the three guest speakers budgeted for 1,500 pesos.

The event will start from 7 am of February 28, 2020, whereby the part one will be the Festival Float Parade that will be held around the campus, to be followed by part two which is the opening program 8 am at College of Arts and Sciences park, Prayer led by Reymar O. Olibas, National Anthem then Opening Remarks by the AB Communication President Dan Aldrich Angeles the CSU ACTIONS President, Inspirational Message by the Dean of the College of Arts and Sciences Dr. Jane R. Sambrana. Declaration of the Opening of the 2nd Sine Agila Festival by Mr. Jan Justin Rodriguez, CSU Actions Adviser. There will be Intermission Number by AB Com first year students then Film screening of films produced by the students that will be held at the College of Arts and Sciences Conference Hall and AB Communication Production Room from 9 am to 4 pm hosted by Ms. Ferlyn Angle Martin and Mr. MJ Etsa.

February 29, 2020, Part three, 11 am held at the PIA-02. There will be invited media partners, student filmmakers “Tipon-Tipon sa PIA” Press Conference facilitated by PIA-02. Part four, Awarding Ceremony to be held at the Cagayan Provincial Museum, Tuguegarao City. Viewing of Film Entries at 2 pm then the Program Proper by 3:30 pm. Assembly, Socialization, and Photo Ops and Grand Entrance. Prayer led by Ronald Badiang then National Anthem, Ms. Lorie Iquin Decena OIC Head of Cagayan Provincial Museum will lead the Opening Remarks. There will be a brief talk about defining the 2nd Sine Agila Festival and Turn over of films to the Provincial Museum. Acknowledgement of the Participants, Guests, Sponsors, and Board of Judges. Afterwards Introduction and Awarding of Certificate of Appreciation to the Board of Judges. Dean of the College of Arts and Sciences, Dr. Jane R. Sambrana will give an inspirational message. The most awaited moment whereby all the special awards like the Best Festival Float, Best Poster, Blockbuster Film, Best Cameo Role and Best Trailer will be announced and given. Best Supporting Actress and Actor, Best Production Design, Best Musical Scoring, Best Sound Design, Best Editing, Best Actress and Actor will be awarded after the special awards. Then the Best Attire Male and Female Category then Major awards will be awarded like Best Screenplay, Best Cinematography, Best Director and Best Shortfilm. The Event will be closed and ended by Erica Ecita. Th second day will be hosted by Mr. Froilan Florague ABMC Alumnus.